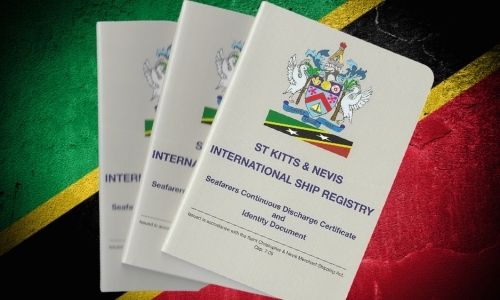 St. Kitts & Nevis Ship Registry Registration is generally used to mean attributing a national character to a ship and a link from the ship to an ownership and control structure in that nation state, (the Flag State) which is then duly recorded in the Register of Ships. In the year of 1958 Geneva Convention on the High Seas, “Ships shall have the nationality of the State whose flag they are entitled to fly”. Such Registers are generally termed “Traditional or Closed Registers”.

Ships registration under St. kitts and Nevis flag . it is the smallest sovereign state in the Western Hemisphere. in both area and population. The country is a Commonwealth realm.

St Kitts and Nevis registry for Seafarer requiring a Continuous Discharge Certificate (CDC) or a Certificate of Endorsement (COE) after the successful completion.

St. Kitts & Nevis has a network of over forty Maritime Registrars, for local contact with a client and who can carry out ship and mortgage registrations, so an owner or manager can deal with such matters in his or her own time zone, own language and with minimum hassle.

SKAN Reg continue to invest in its operations and have partnered with leading companies to provide its functions in a timely and strong manner.

The twin island nation of St. Kitts & Nevis is located in the northern section of the Eastern Caribbean, approximately 1,300 miles southeast of Miami, Florida. The name St. Kitts is a shortened form of its official name, St. Christopher given to it by Christopher Columbus when he landed there in 1493.

St. Kitts & Nevis International Ship Registry (SKAN Reg) commenced operation in 2005. By the end of 2019 had registered over 3000 vessels. It also has also issued seafarer documents to over 25,000 seafarers of many nationalities.

The English and French held St. Kitts jointly from 1628 to 1713. During the 17th century, intermittent warfare between French and English settlers ravaged the island’s economy. Meanwhile Nevis, settled by English settlers in 1628, grew prosperous under English rule. It’s also a British territory in the Caribbean to become independent, gaining independence in 1983.

The St. Kitts & Nevis International Ship Registry (SKAN Reg), an International Open Register, falls under the jurisdiction of the Department of Maritime Affairs of the Ministry of Public Works, Utilities, Transport and Posts.

The St. Kitts & Nevis Merchant Shipping Act and Maritime Regulations which are based upon English Law are the foundation for maritime operations. This foundation offers international familiarity and the fundamental protection afforded to Ship Owners, Operators, Managers, Seafarers, Mortgagees and Mortgagors.

Why should you trust SKNISR?

At SKNISR, we just don’t claim to be the best, but we make a bond of trust. We believe in the services that benefit our clients. The establishment of the St. Kitts and Nevis International Ship Registry is an opportunity for the Federation to eventually and see its own national flag flying from some of the many passenger ships that call at the cruise terminal at Port Zante. More importantly, as well as earning income, it will promote the awareness and increase the standing of the Federation globally.

Some of the precise reasons why you can trust St. Kitts and Nevis Ship Registry services are listed as follows:

St. Kitts and Nevis Ship Registry stands for honesty and commitment in the world of maritime services. We are entirely dedicated to our clients, and we work as per your needs and satisfaction.

We respect the dedication and loyalty of our customers and make sure that they get the best service from us, by providing exclusive discounts and online digital payments.

We have a collection of services to depend on and provide maritime courses, visa services. St. Kitts and Nevis Ship Registry CDC, and more along with STCW certifications.

St. Kitts and Nevis Ship Registry CDC is a seaman book that is received once there is a completion of the STCW certifications course. The seaman book is issued in the following categories:

St. Kitts and Nevis Ship Registry CDC, clients have to provide important documents required for the process. which includes :

Before you can register your vessel under our flag, St. Kitts and Nevis Ship Registry requirements to the Ship Ownership Qualification Regulations 2005.

Based on St. Kitts & Nevis administration has issued a Maritime Circular no. MC/70/17 providing guidance related to IMO resolution A.1088 (28).

There are no restrictions on ownership of St. Kitts and Nevis ships, this being a representative person is a requirement of the Registrar for Ship Registration.